The information on this website is provided for convenience purposes only.  Every effort has been made to provide accurate information, however, the City reserves the right to provide updated or revised information to correct any inaccuracies.

official copy. If you require an official copy of any documents, please contact the Clerk-Treasurer's office at 920-398-3031.

Looking for a specific person at the City of Markesan?  Click on the "Contact Us" link above for a directory of City personnel. ﻿ 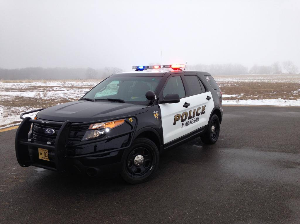 To Protect and Serve.

A mixture of full-time and part-time staff, our highly trained, sworn officers are responsible for all law enforcement activities in the City.  The department also provides school liason, code enforcement, and school crossing guard services.

This is an ongoing recruitment; you may apply by submitting a Law Enforcement Standards Board form DJ-LE-330 to: William A. Pflum, Chief of Police, Markesan Police Department; 150 S. Bridge Street, Markesan, WI  53946 or by email to wpflum@markesanwi.gov

The Police Chief for the City of Markesan is Will Pflum.  Prior to his promotion to Chief, Will served as a patrol officer, School Liason Officer, Sergeant, and Assistant Chief with the Department.  Chief Pflum has been with the department since 1998, serving as Chief since 2015.

Sergeant Cody McLean.  Cody has been with the department since 2010.  Cody serves as the full-time Markesan District School Liason Officer.

Patrol Officer Ryan Behlke.  Ryan has been with the department since 2020.

Patrol Officer Tanner Weber. Started with the City of Markesan in February 2022.

Henry Phippen has served as a school crossing guard since 2013.

Clyde Olson has served as a school crossing guard since 2015.

Cheryl Abendroth has served as a school crossing guard since 2021.